Constructed wetlands are a common technique for improving polluted waters, including those contaminated by AMD. Typically, affected waters are diverted from a stream into a large, shallow pond.  This arrangement treats the contamination by:  1.) increasing the water’s movement, which raises oxygen levels, thereby boosting iron fallout; 2.) containing the water, which allows more time for iron settling; and 3.) filtering the water through hydrophytic vegetation, like grasses and cattails.

The Espy Run wetlands – located in the Loomis Park area of Hanover Township – is based on this system, treating a natural AMD seep discharging from the underground mine pools.  Because of the system’s initial success, it was expanded in 2001 and 2011.

July – August 2013 | Based on recommendations from PA DEP, the Western PA Coalition for Abandoned Mine Reclamation authorizes $4,570 for repairs to the Espy Run system through the Quick Response Emergency Repair Funding program.

April 2012 | EC, in partnership with the Pennsylvania Environmental Council, carry out a tree planting of pin oaks at the Espy Run wetlands site.

August – September 2011 | During routine water quality testing, a washout area is discovered near pond inlet.  Washout is repaired.  Fencing is installed around site.

November 2009 – June 2010 | EC meets with representatives from several engineering consultants and the PA Association of Conservation Districts (PACD) regarding project design and preparation of the Analysis of Brownfield Cleanup Alternatives (ABCA).  PACD completes draft analysis, which is submitted to US EPA for review.  Comments are received and document is revised.

June 2009 | EC receives an additional $10,000 grant for the project from the Community Foundation for the Alleghenies.

May 2009 | EC awarded $200,000 USEPA Brownfields Cleanup award to further enlarge the Espy Run wetlands.  Expanding the facility will allow all of the AMD discharge to be treated.

September 2000 | The Office of Surface Mining (OSM) awarded EC a $41,600 grant through the Appalachian Clean Streams Initiative to enlarge the Espy Run wetlands, and to support subsequent testing services.

Prior to June 1997 | EC had been awarded two grants totalling $925,000 from the US EPA for two AMD projects:  the Espy Run seep project, which was completed in the fall of 1996; and the Dundee Road wetlands, to treat a discharge from the Askam Borehole. 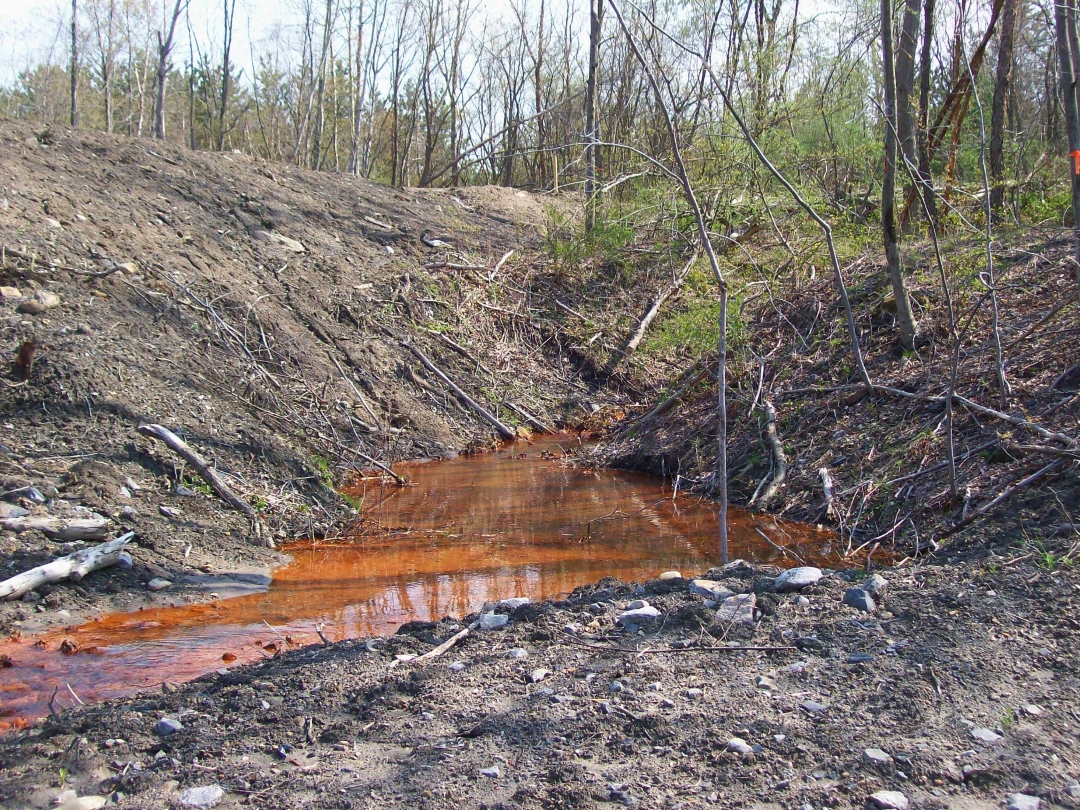 View of Espy Run, prior to wetlands project. 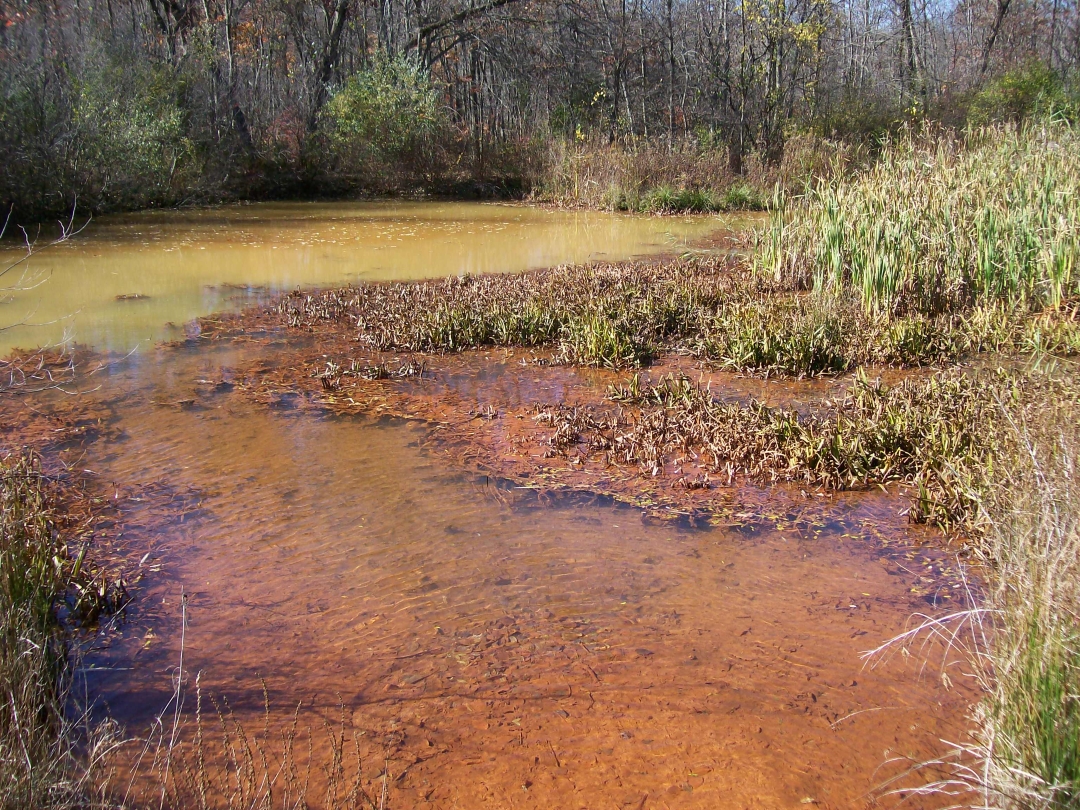 Ponding of AMD-contaminated waters from the Espy Run discharge. 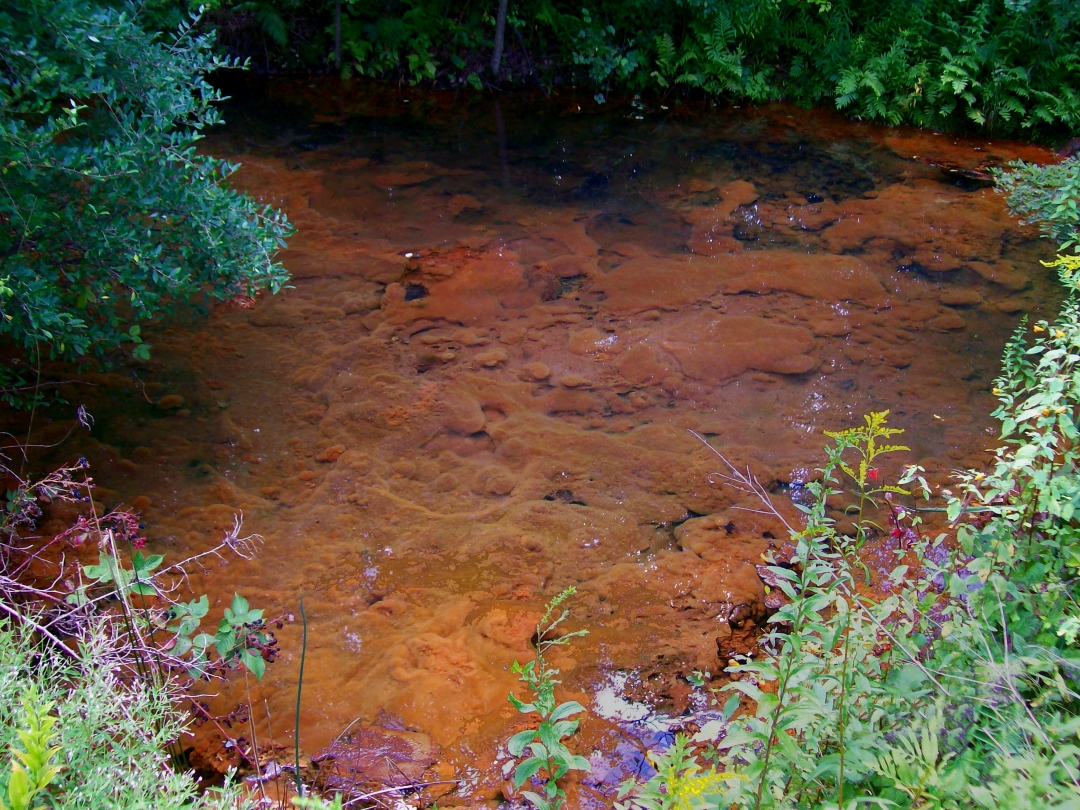 Over time, AMD builds up in waterways, creating a thick sludge that coats both streambeds and banks, like seen here at Espy. 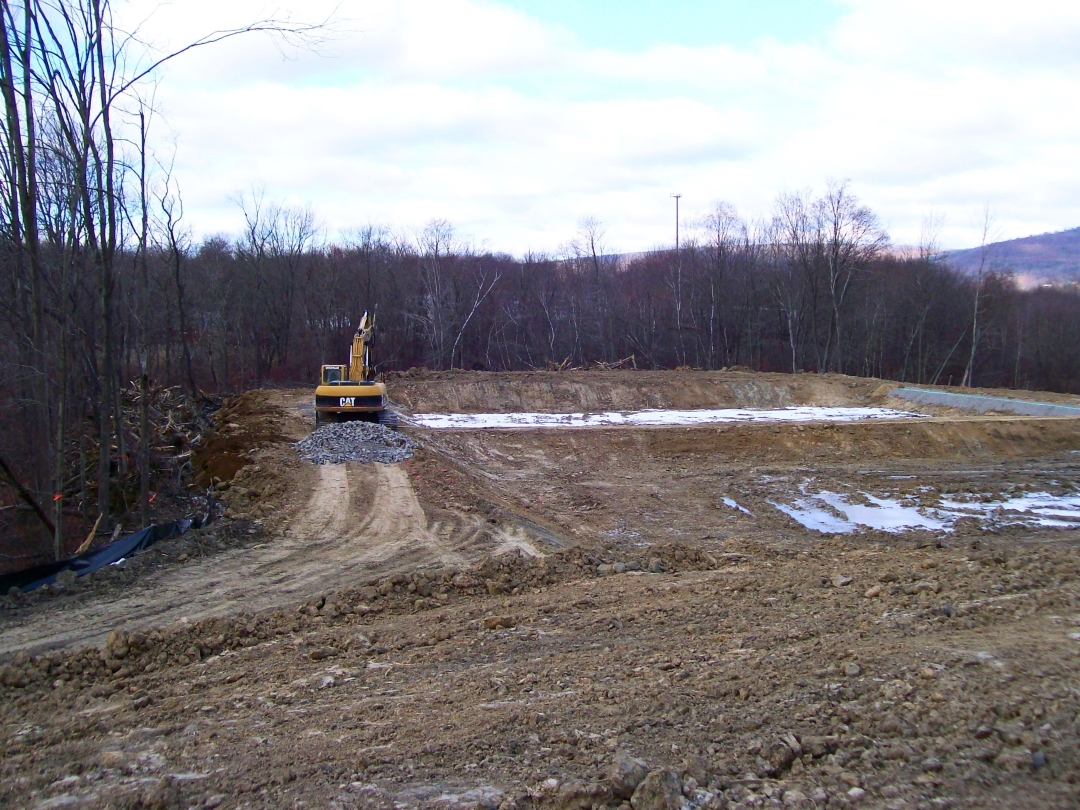 After clearing and grubbing, work began on excavating and grading for the pond structure. 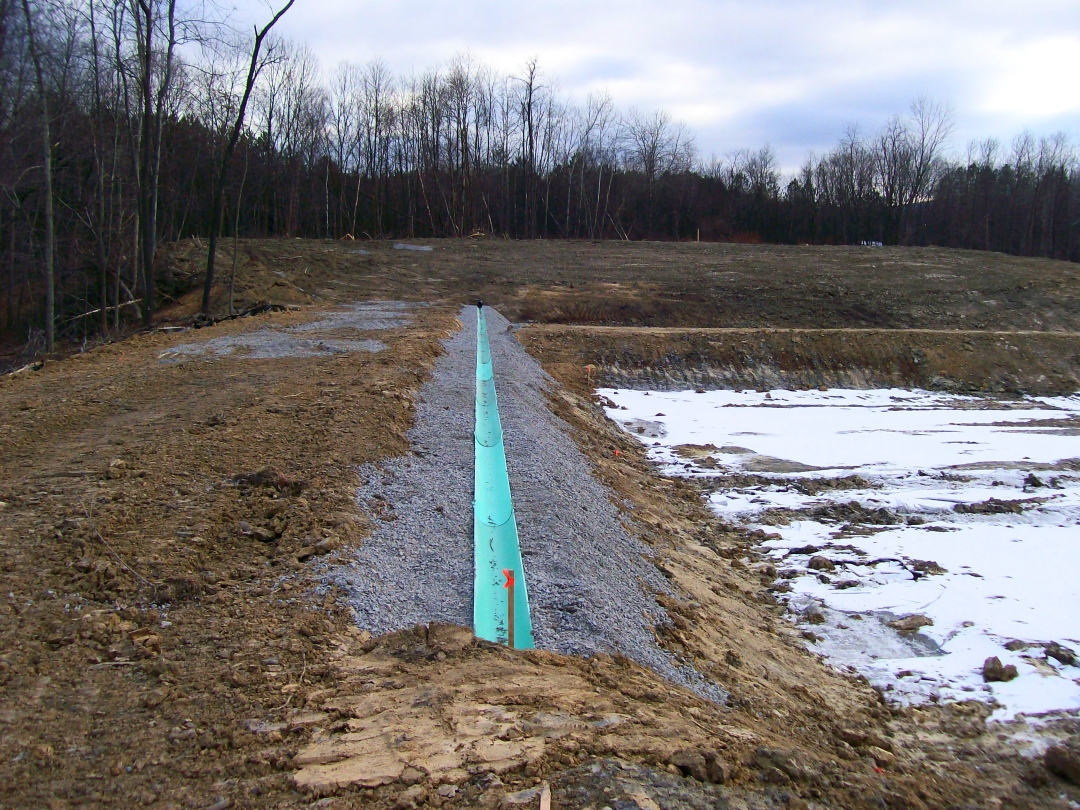 Laying of the inlet structure, which would divert waters from the Espy discharge into the wetland settling pond. 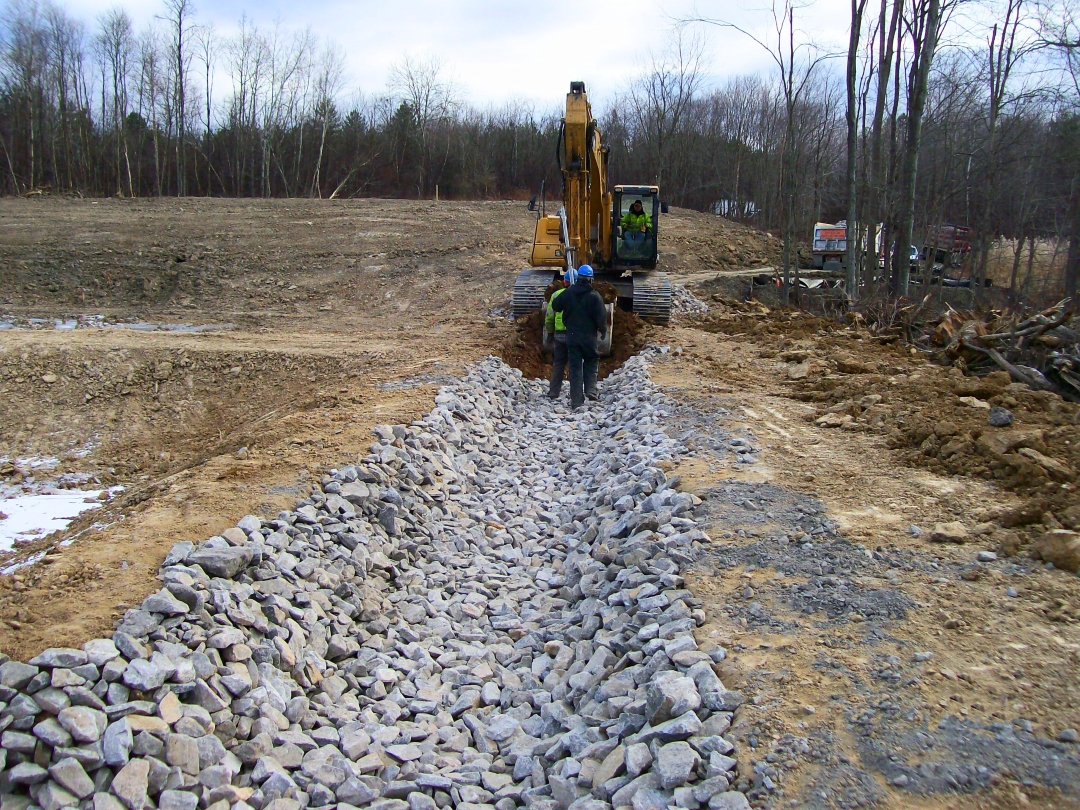 Construction of the outlet for water from the settling pond. 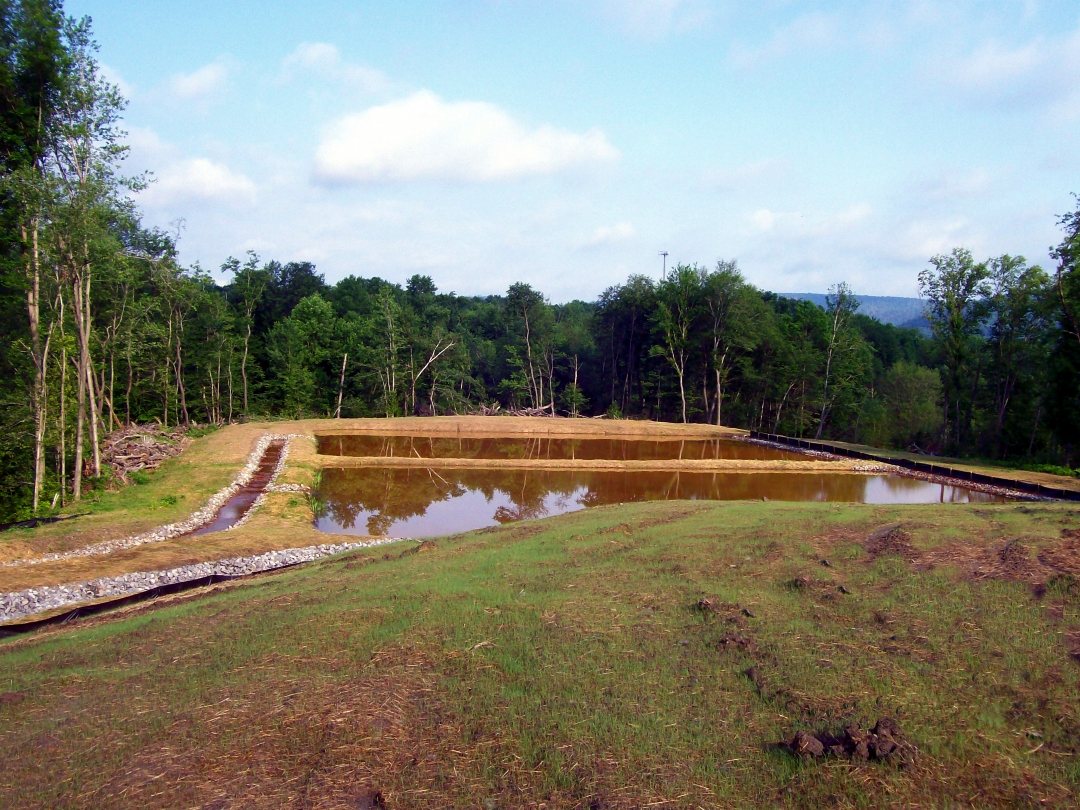 The completed dual-pond wetlands.  The inlet is to the right, the outlet to the left. 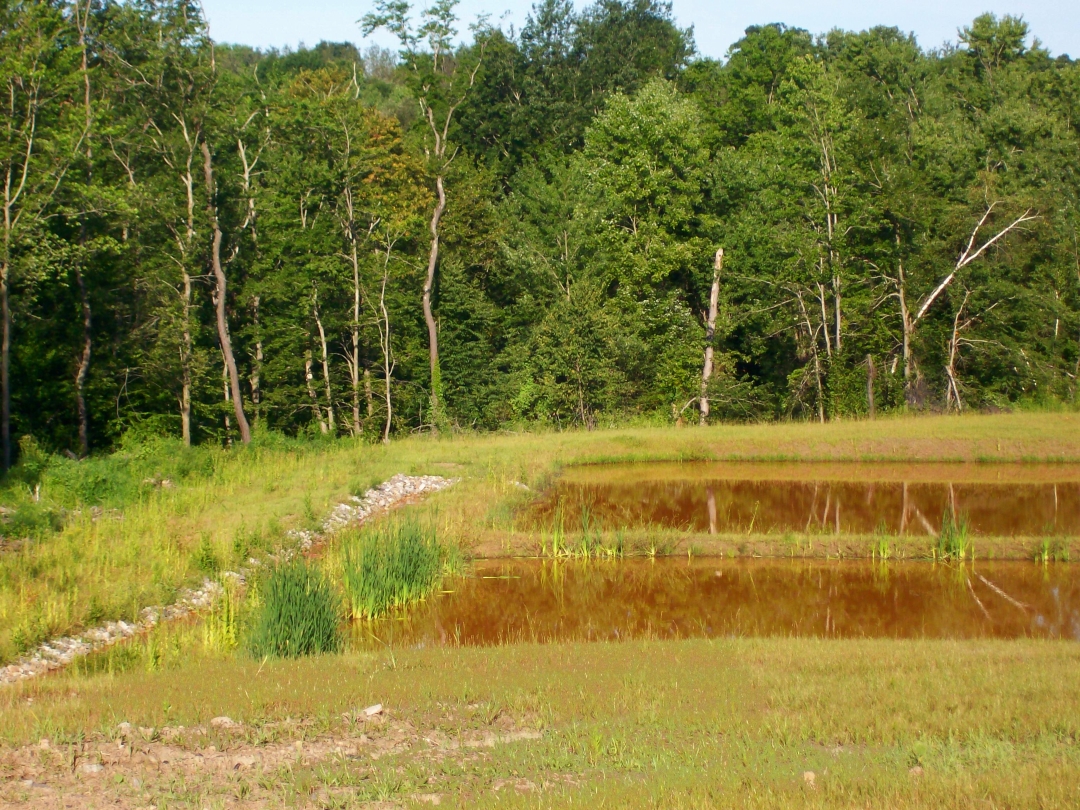 Grasses and cattails beginning to take root along the wetlands’ banks.

The outlet structure from the Espy Run wetlands, continuing to be populated by grasses and cattails. 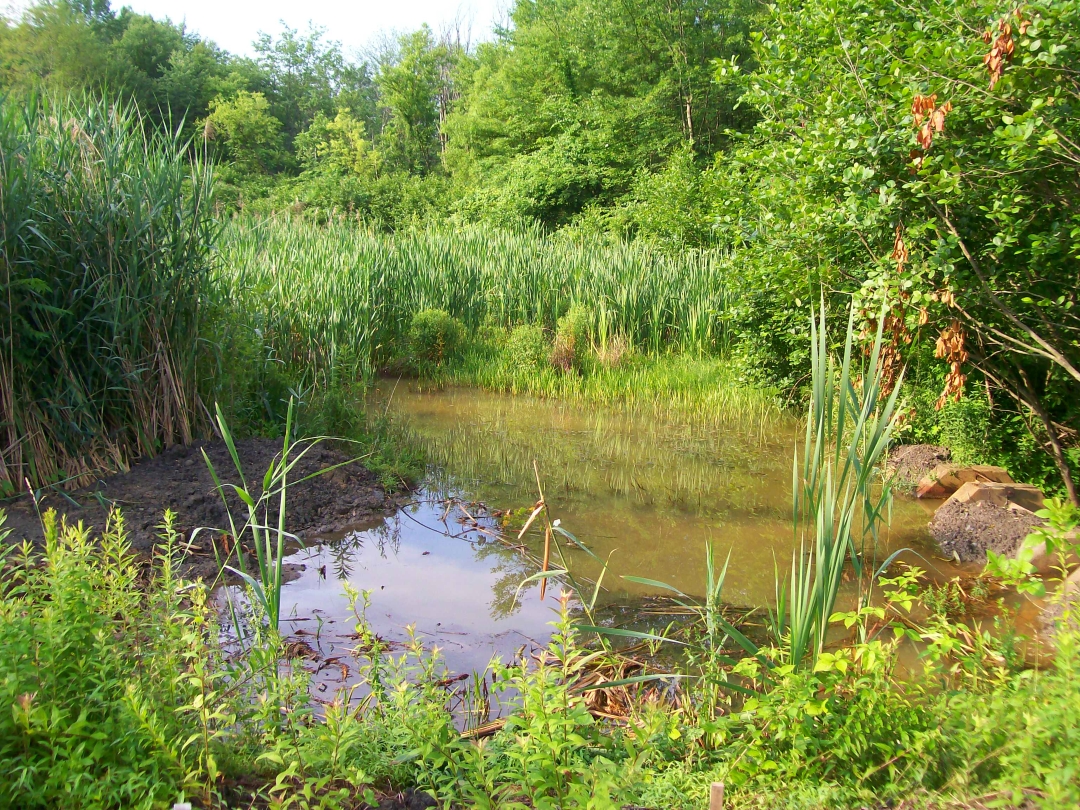 The polishing cell at Espy – the final stage before processed waters re-enter the stream.  The clarity of the water demonstrates the wetlands’ effectiveness in treating AMD. 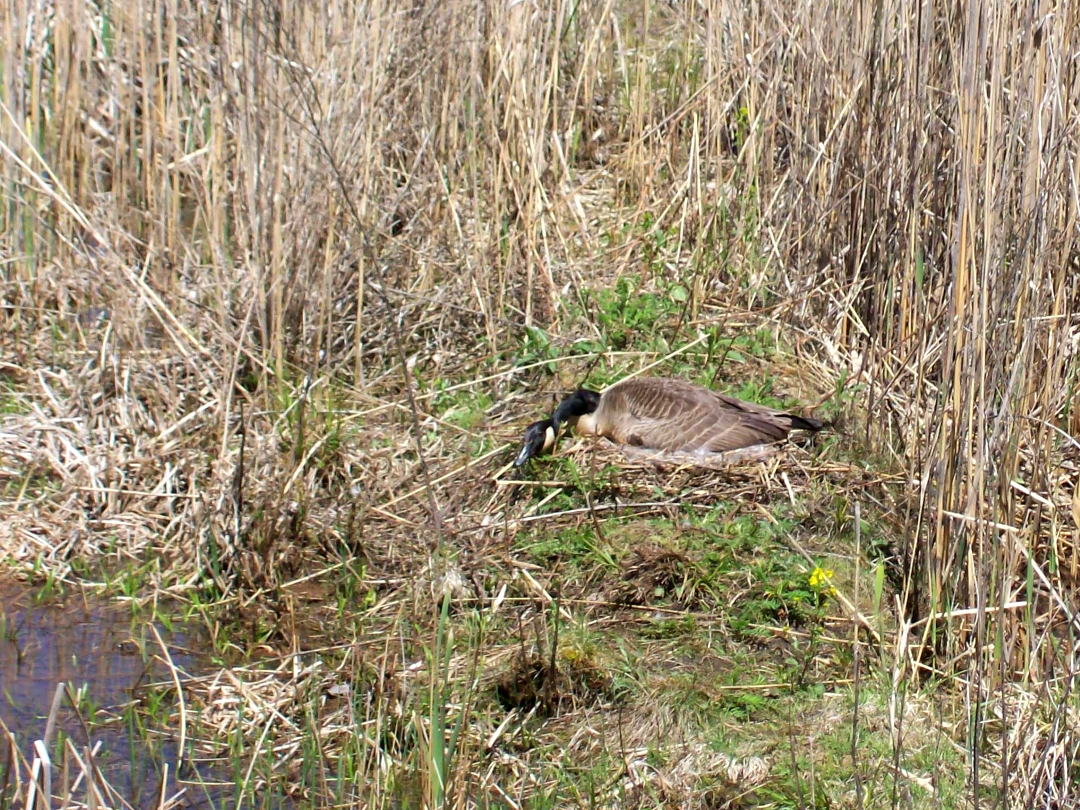