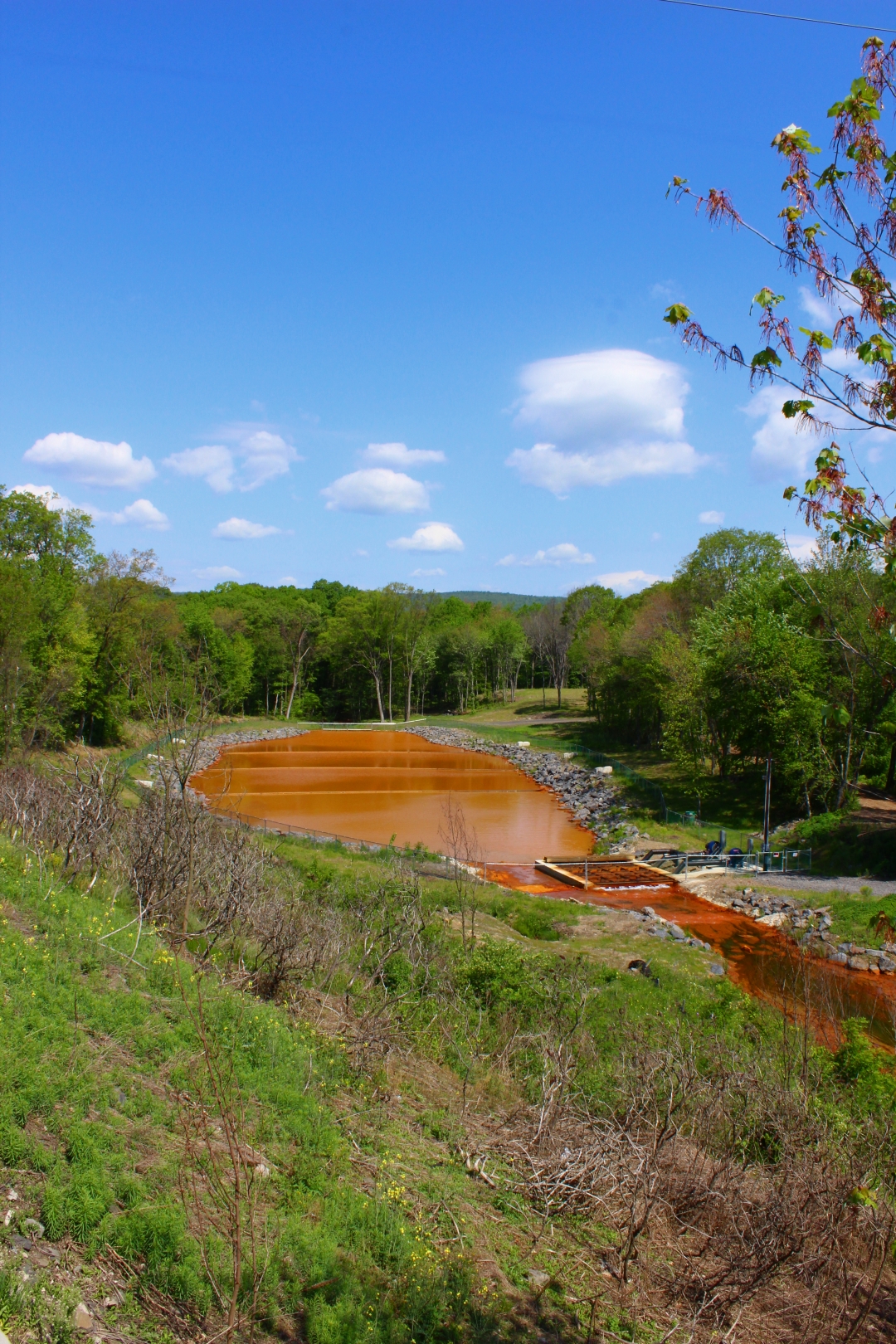 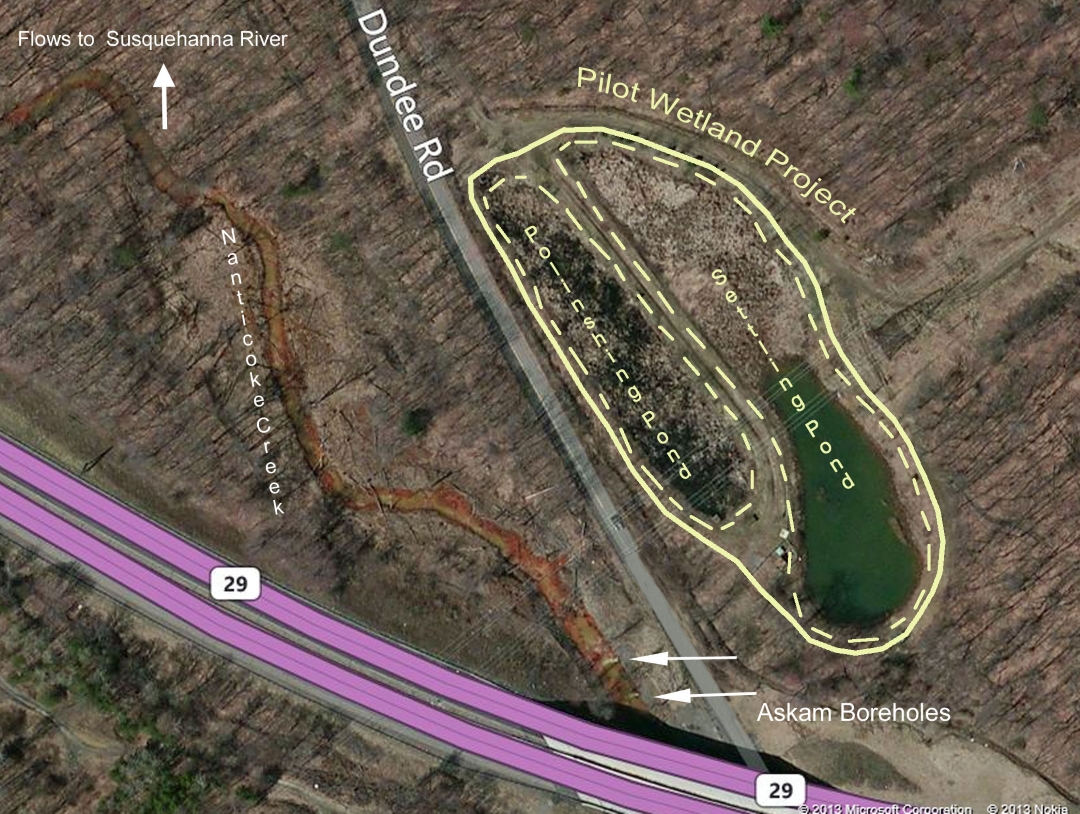 Map of Askam site prior to construction of the oxidizer system. Locations of the two boreholes are noted, as well as the Phase II Dundee Road Constructed Wetlands project. The Askam Borehole AMD Treatment System was constructed north of the boreholes, on the Nanticoke Creek.

During the course of operations, the Blue Coal Corporation mined much of the land within the 8.2 mi² Nanticoke Creek.  When the company filed for bankruptcy, the mine workings were abandoned.  Above ground, stripping pits and culm banks defaced the landscape. Below, underground shafts and tunnels became flooded.  These conditions led not only to flooding of homes and businesses, but also to ongoing damage of the environment.

As discussed in the AMD overview, boreholes are one method of handling underground mine waters.  The Askam Borehole, named after a nearby village in Hanover Township, was drilled by the Pennsylvania Department of Environmental Resources to relieve water pressure from a mine pool that was forcing groundwater to backup into homes.  Although the flooding stopped, once the mine waters were discharged into the Nanticoke Creek, AMD resulted.  These flowed downstream, polluting the stream and surrounding watershed.

In 1999, Earth Conservancy built a wetlands system across the road from the Askam Borehole to help mitigate the AMD pollution, and for nearly a decade it successfully mitigated the discharge. However, in 2008 the borehole collapsed. Localized flooding returned. In response, the U.S. Department of the Interior’s Office of Surface Mining drilled two new boreholes, both of which again released their effluent into the Nanticoke Creek.

With the Dundee Road Wetlands offline, EC sought a new solution to treat the AMD discharge.  Previously, in its Section 206 – Ecosystem Restoration Report (2005) for the Nanticoke Creek watershed, completed with the Pennsylvania DEP, DEP’s Bureau of Abandoned Mine Reclamation, and the United States Army Corps of Engineers, EC had explored using an oxidizer for AMD mitigation.  An oxidizer is a semi-passive treatment system, able to treat higher volumes of effluent more quickly and in a smaller space than a traditional wetlands. Contaminated water flows into a large, chambered unit in which it is injected with massive amounts of air. Strong turbulence results, so powerful that dissolved metals precipitate from the water. The water then exits into a settling pond divided by screening baffles, which continue to filter the iron, prior to the water’s release into a polishing cell and then back into the primary waterway.  In light of the sitution, constructing an oxidizer below the boreholes seemed ideal.  Construction of the new treatment system began in 2013, featuring a Maelstrom® oxidizer, and was completed in 2014.  The project was supported by grants from the Pennsylvania DEP, the U.S. Department of the Interior’s Office of Surface Mining, and the Pennsylvania Association of Conservation Districts, and through EC’s own reserves.  Approximately $950,000 was spent on the Askam project.

In 2015, EC received a grant from the PA Department of Community and Economic Development to add enhancements to the system, as well as support operations and maintenance costs.  These included adding boulders below the boreholes to increase natural aeration of the water; increasing the height of the outlet to retain water longer; and adding a valve to allow draining of the pond to remove sludge buildup. 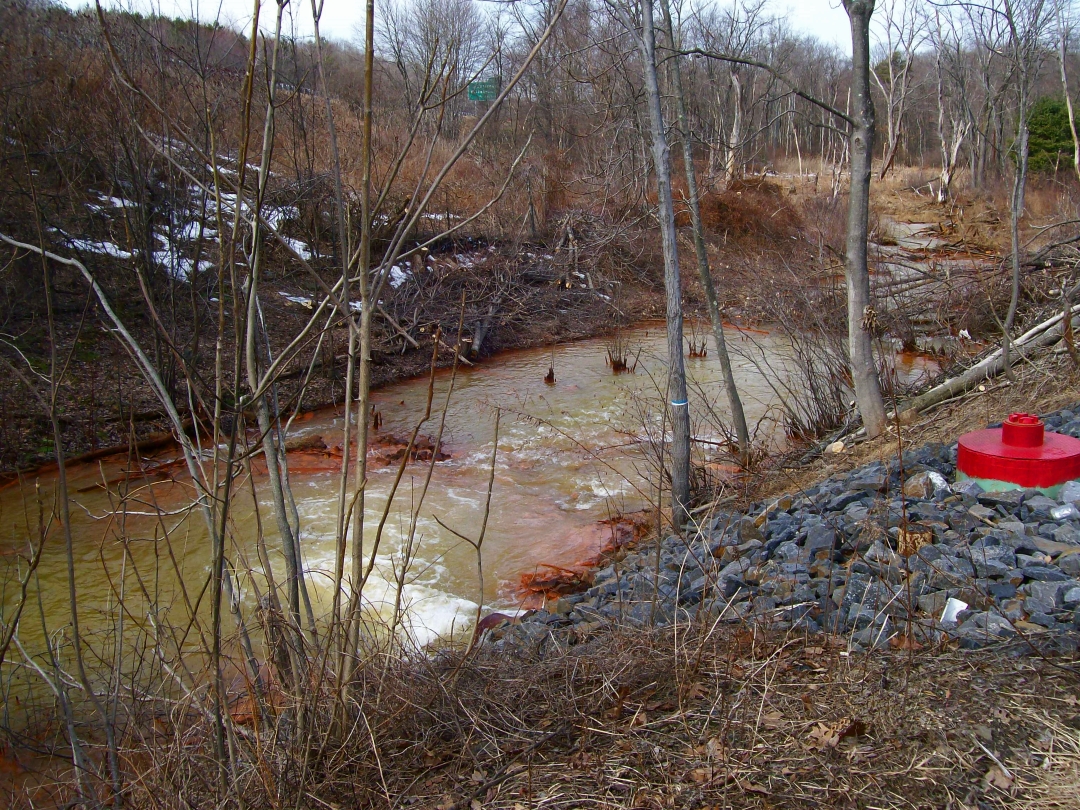 View of one of the two boreholes at Askam, discharging into the Nanticoke Creek.  The orange coating on the rocks downstream evidences AMD-contamination. 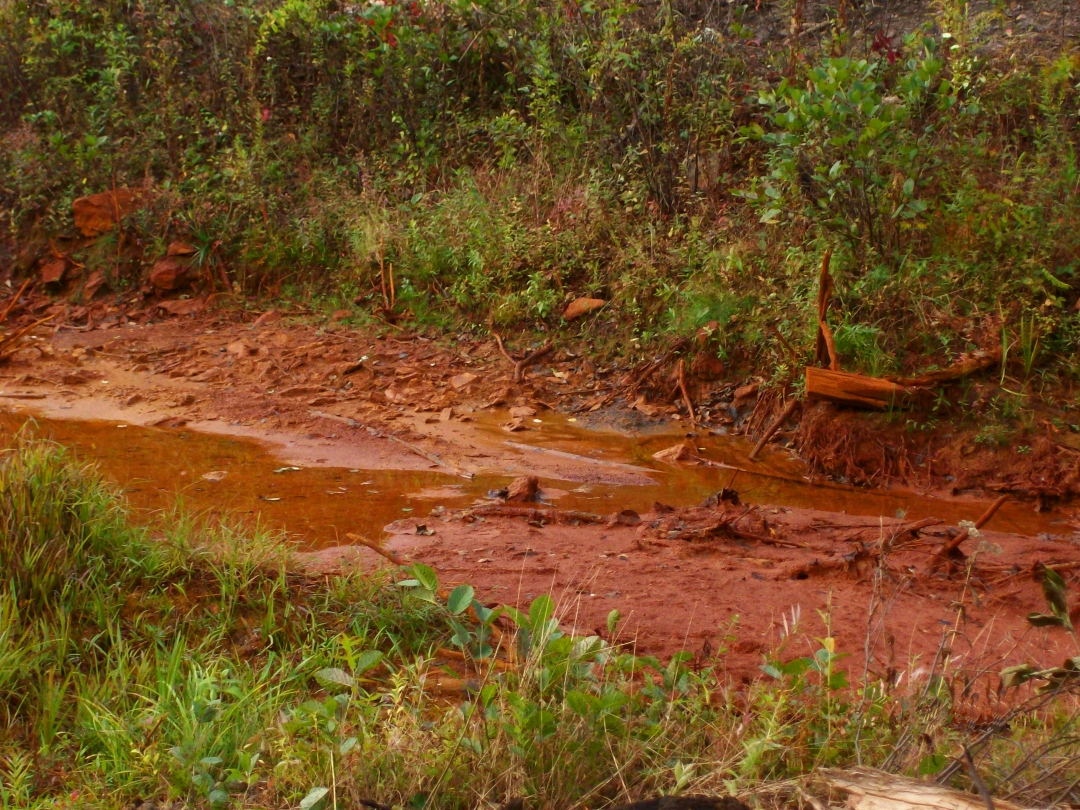 Orange, muddy sludge in the Nanticoke Creek at Askam, resulting from years of AMD pollution. 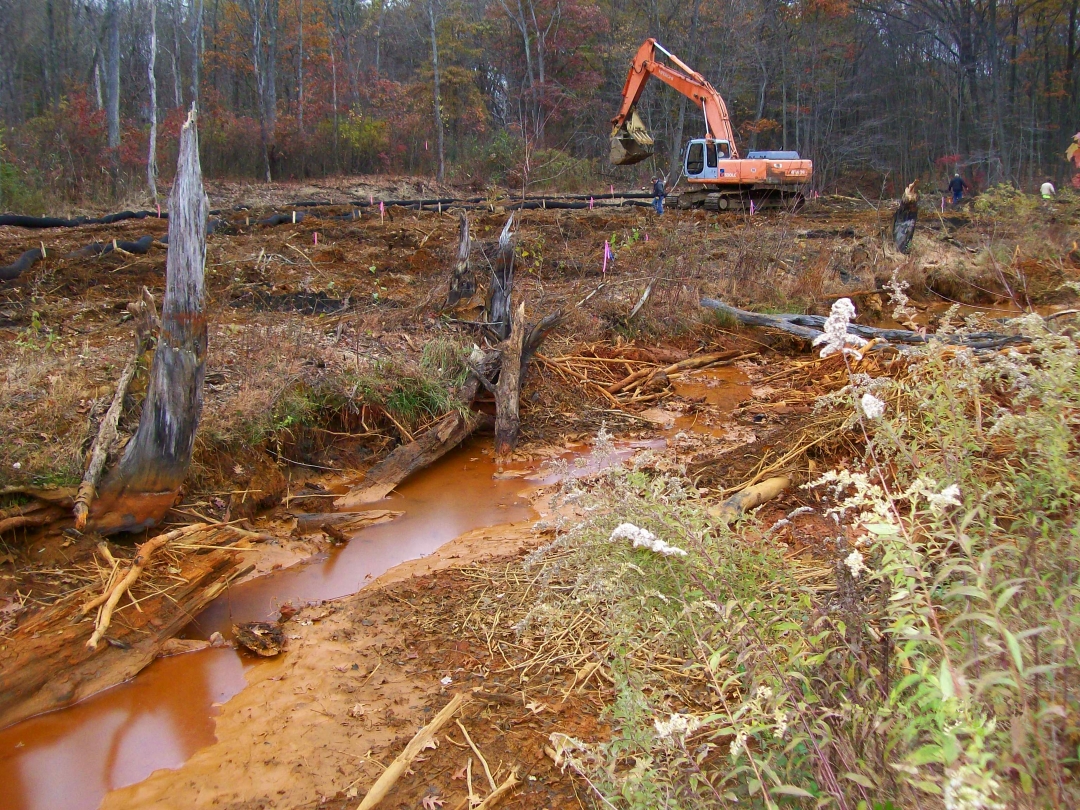 Construction phase on the AMD treatment system begins, first by clearing and grubbing the site. 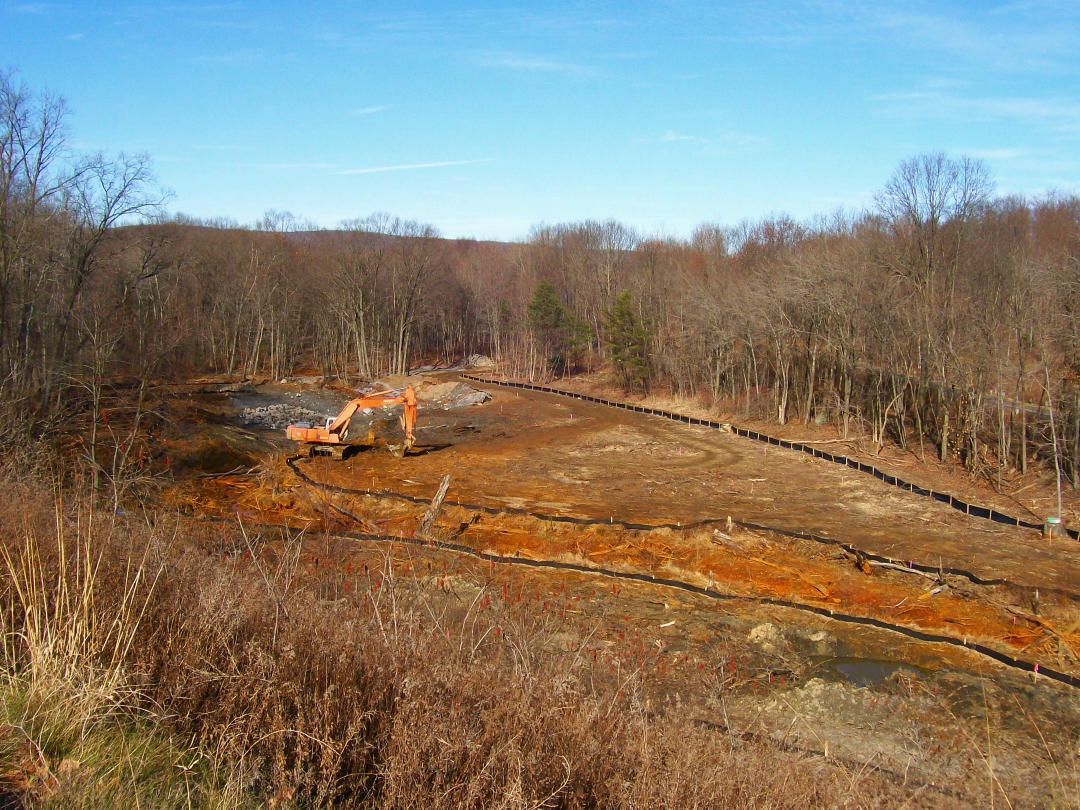 The Nanticoke Creek and the area for the settling pond are circumscribed with a sediment barriers. 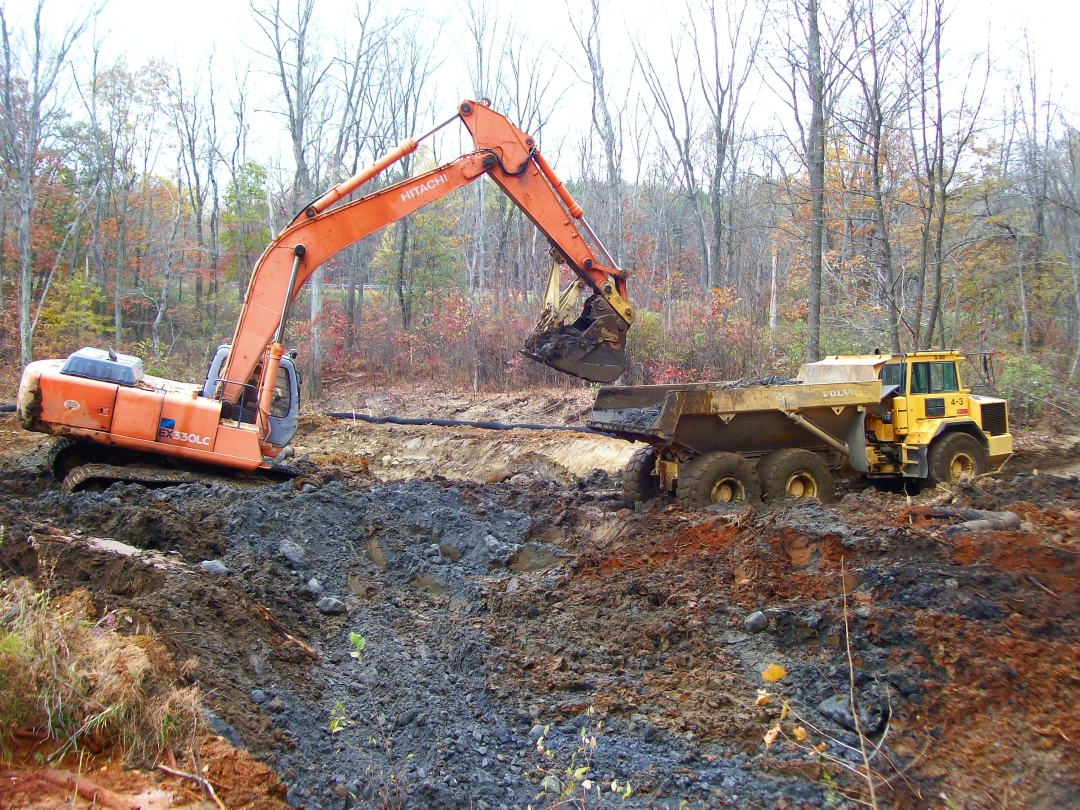 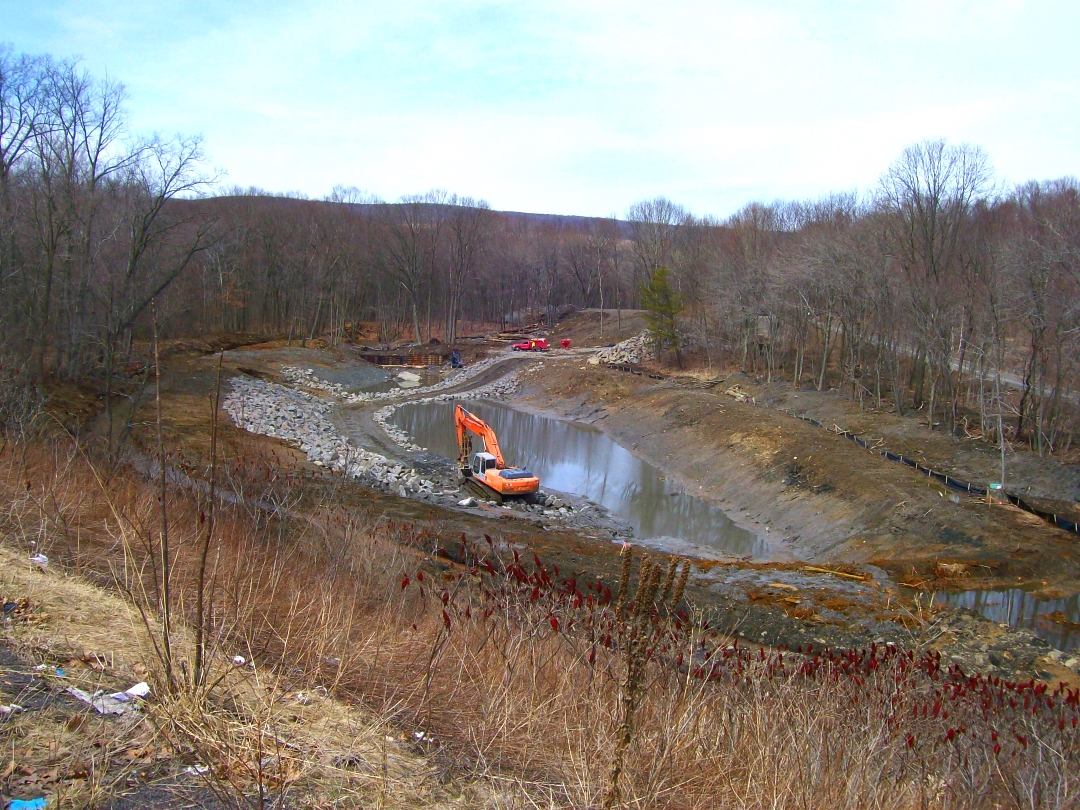 Continuing work on the settling pond.  Riprap is used along the bank to prevent erosion, as well as to encourage settling by slowing moving waters. 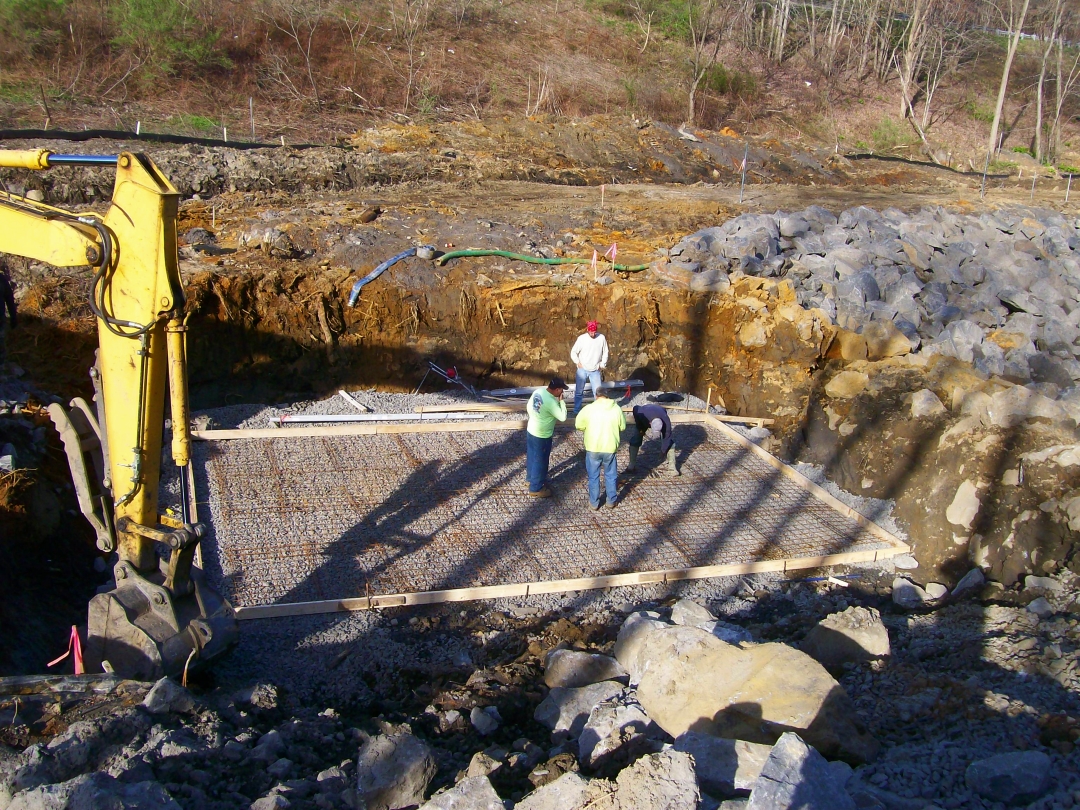 Construction of the concrete pad for the oxidizer unit. 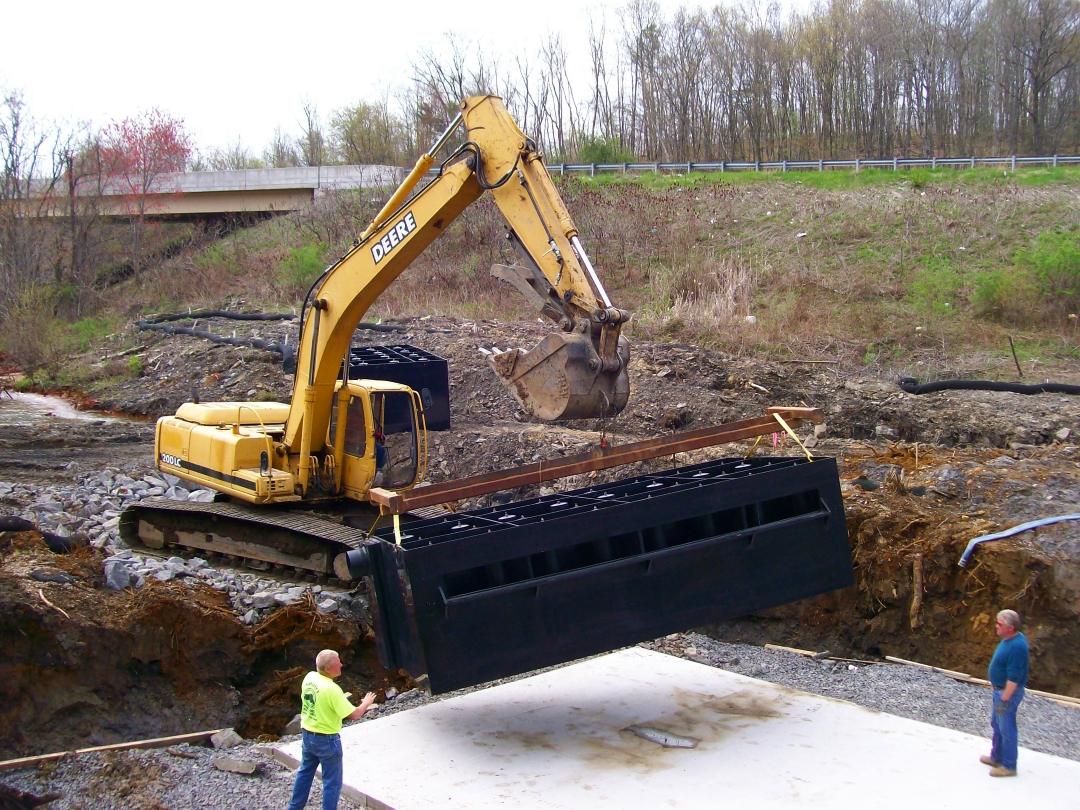 The Maelstrom Oxidizer is moved into place. 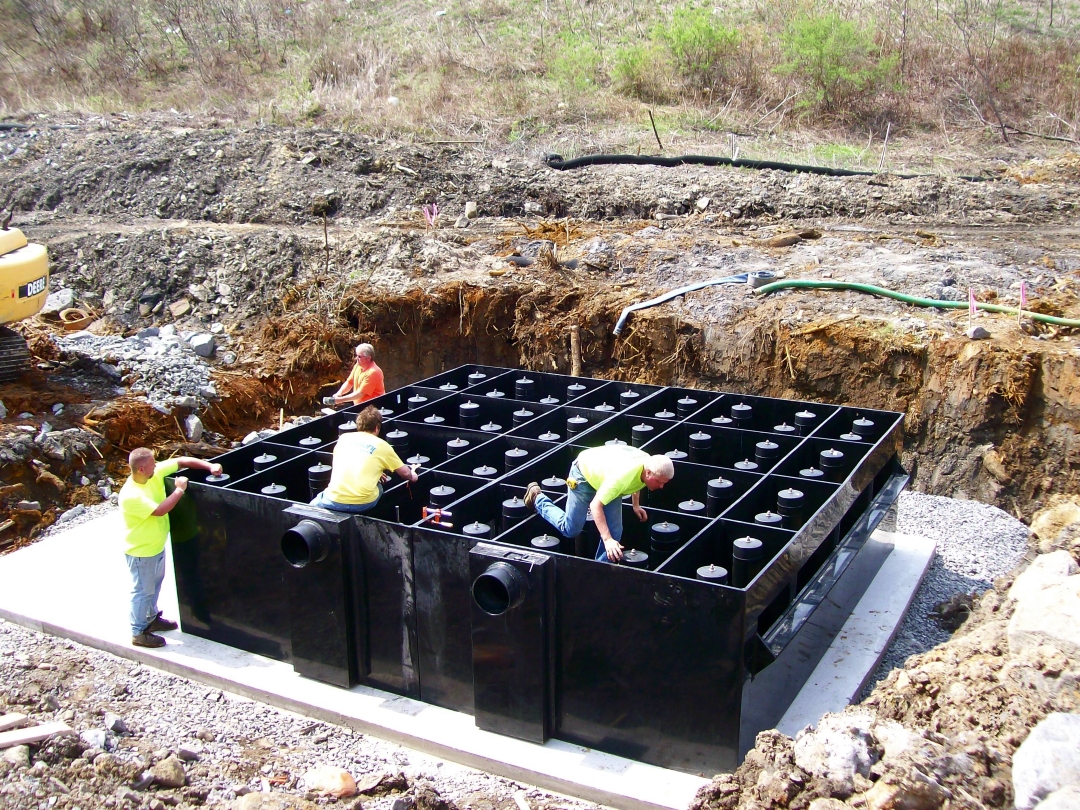 Working to install the Maelstrom Oxidizer. 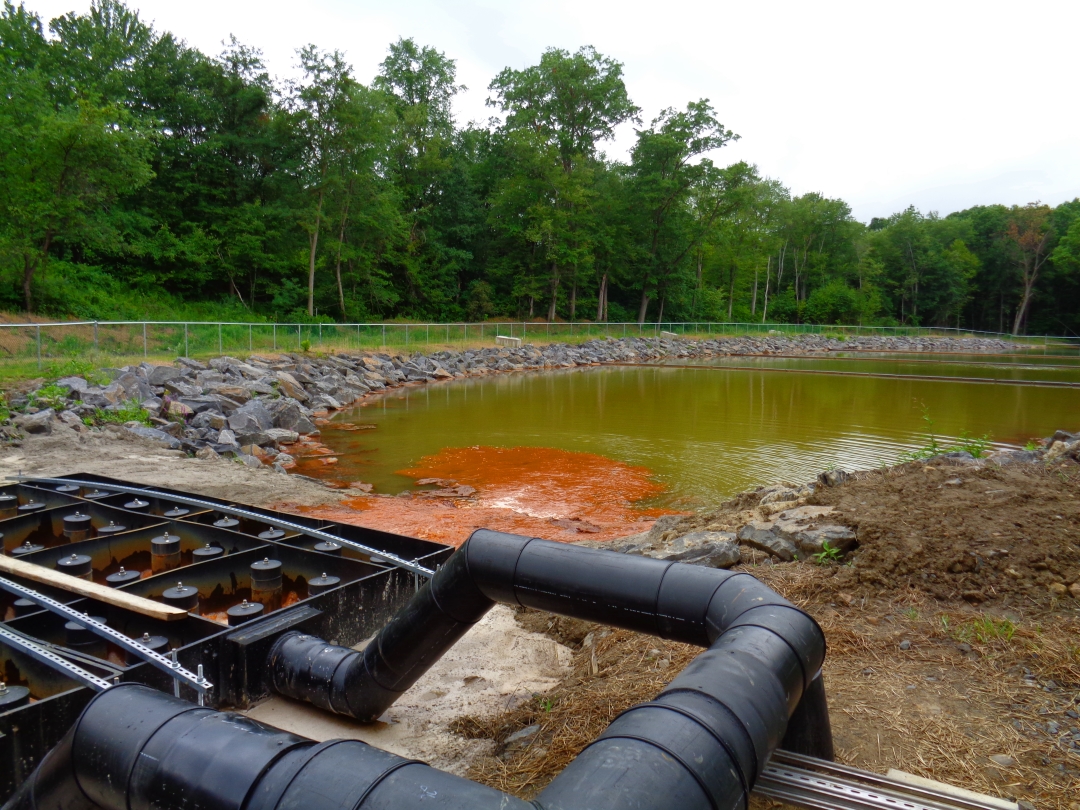 The oxidizer goes online:  After creek waters pass through the oxidizer, they enter the settling pond to allow iron to fall out of suspension.  Here, the entry of the AMD-contaminated waters is clear. 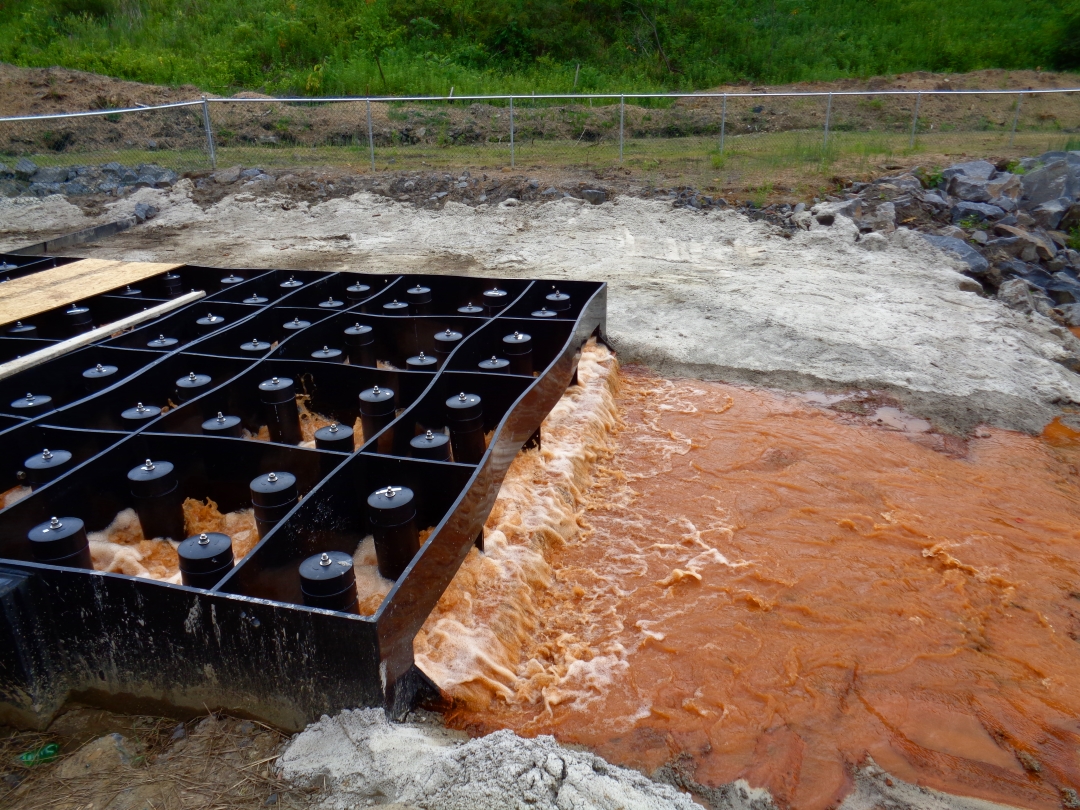 Front view of the Maelstrom Oxidizer at work, injecting additional air into the waters passing through. 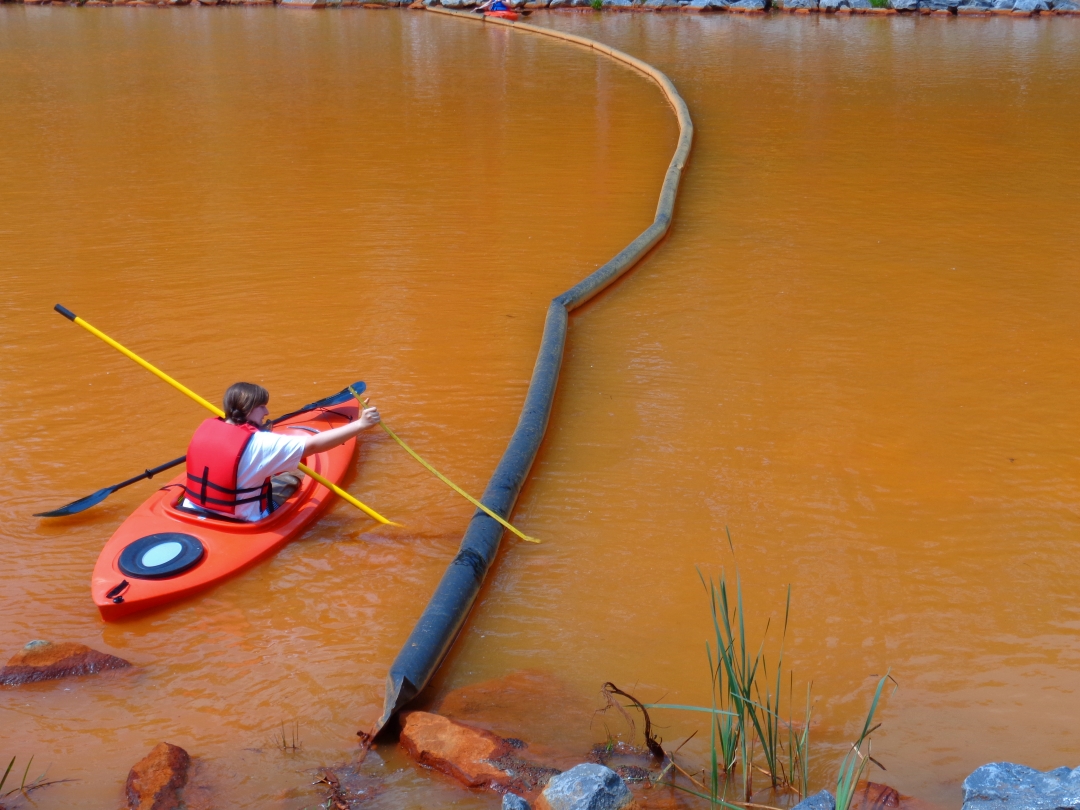 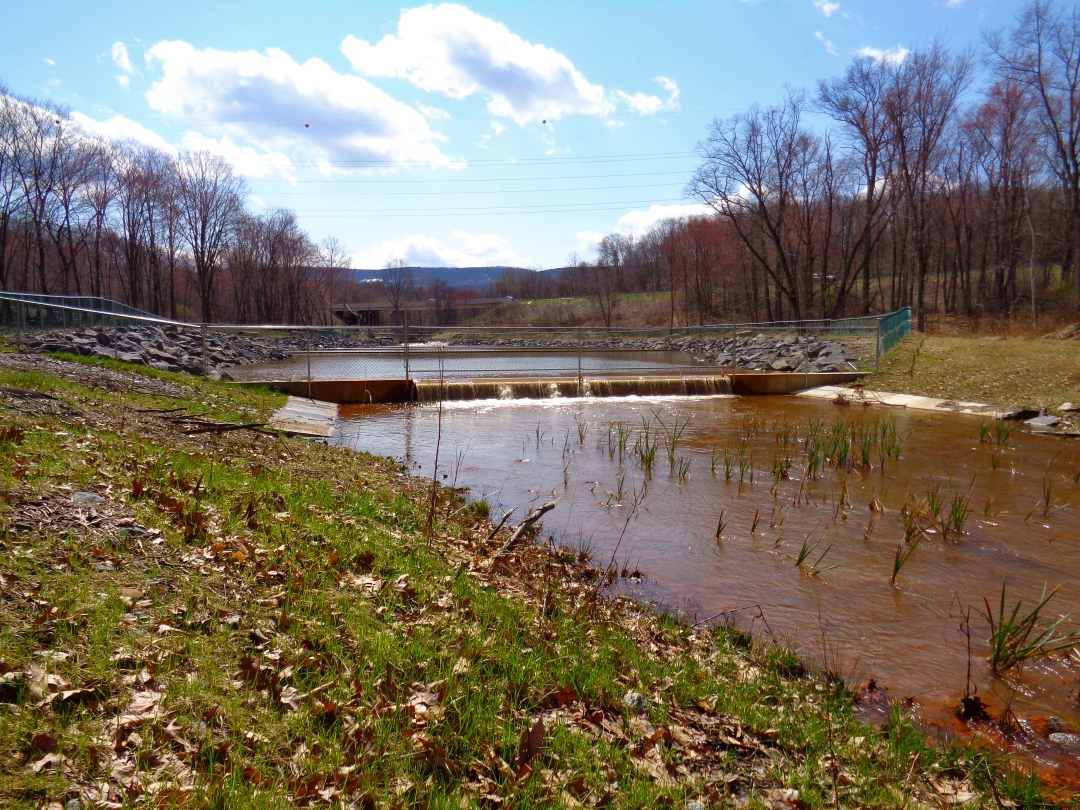 View of the Askam system from the outlet, which has been planted with cattails to provide additional filtration to the exiting waters. 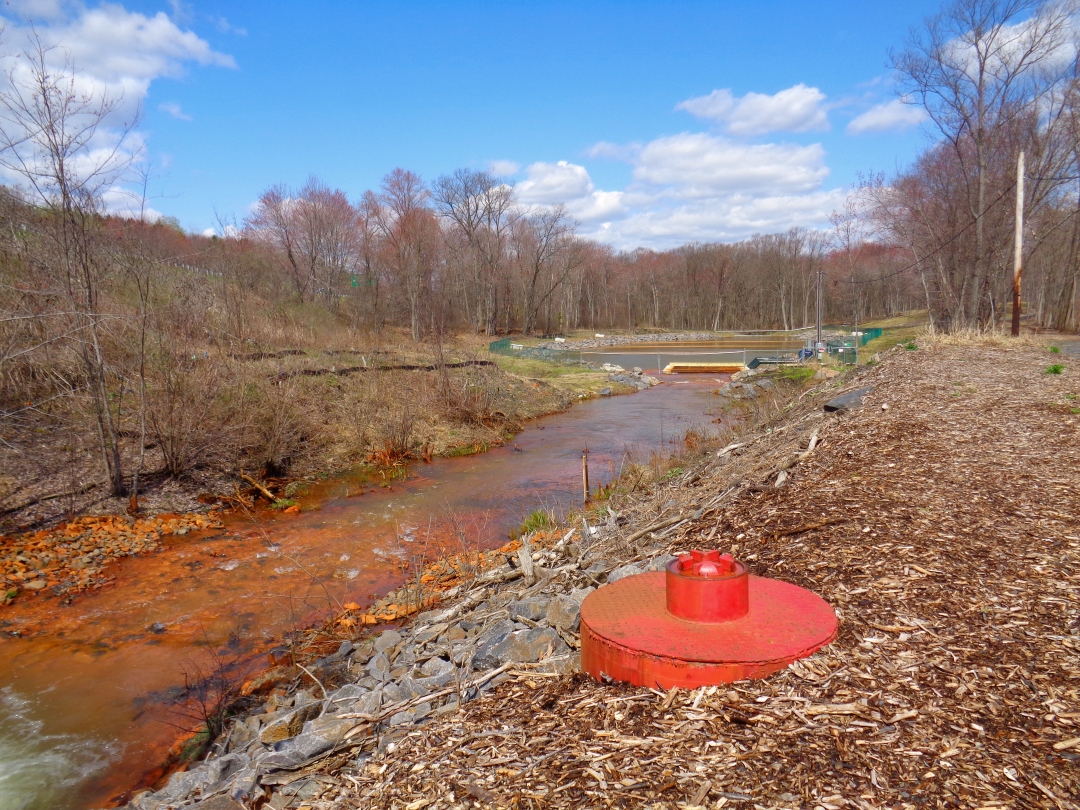 View of the Askam Borehole and its discharge, along with the AMD treatment system, now online.